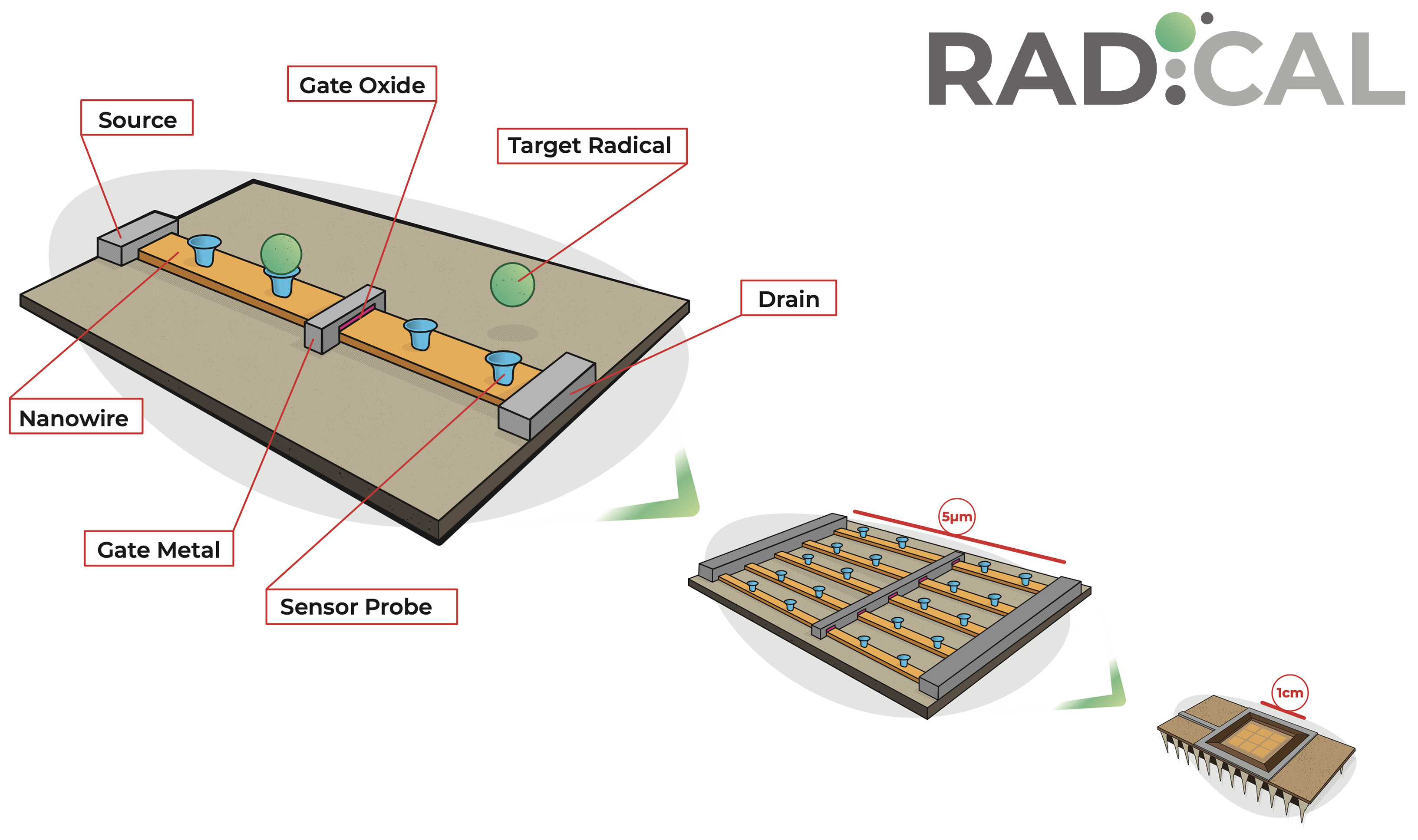 In this guest blog, our modelling lead, Prof. Leonidas Tsetseris at the National Technical University of Athens (NTUA) describes the computational physics behind our radical-sensor simulations.

Detecting radicals by any device is a complex phenomenon, involving a number of different steps. The RADICAL project is focused on developing a novel type of radical sensor, based on a Si nanowire.

In the first year of RADICAL, Dr Dimitrios Kaltsas and Prof. Leonidas Tsetseris from the Computational Condensed Matter Physics and Materials Science Group at NTUA have been studying several key processes and systems which are integral parts of the consortium’s efforts towards the efficient and selective detection of atmospheric radicals.

The primary modelling tools employed are state-of-the-art quantum mechanical calculations within the Density Functional Theory (DFT) approach, which is one of the best computational methods to probe accurately physical and chemical processes at the atomic-scale.

The NTUA studies can be split in two main groups, which are interconnected and inter-dependent.

In the first set of studies, the NTUA team has focused on the structural and electronic properties of the dominant facets of Si nanowires, with or without a thin so-called native oxide layer present. Particular emphasis has been given to the functionalization of these facets with self-assembled monolayers (SAMs) which provide chemical groups suitable for the sensing of radicals.

The calculations have probed the morphology of candidate SAMs, e.g. those shown in the animation on the right for octadecene molecules on a Si(111) surface.

Of special importance here is the level and nature of packing of the molecules within the SAM, and the capacity (or lack thereof) of the protruding chains to retain a more or less upright position and thus facilitate the reactions of any approaching radicals with the SAMs end-sensing groups.

In the second set of studies, the NTUA team has been investigating the reactions between atmospheric radicals (namely hydroxyl and nitrate radicals) and other ambient molecules (e.g. ozone) with various sensing molecules.

The efficiency of these reactions has been assessed with calculations of their reaction and activation energies. In this way, certain sensing molecules can be selected and proposed for experimental implementation if the corresponding interaction with atmospheric radicals is energetically favourable and if it can easily be activated at room temperature due to a low reaction barrier.

In fact, a key goal for these studies has been to identify sensing molecules which can interact with OH and NO3 radicals through barrier-less or almost barrier-less processes, whereas the barriers of their reactions with other ambient molecules (e.g. O2 or H2O) are finite (i.e. non-vanishing). This distinction can enable the facile and selective detection of radicals.

About the author: Professor Leonidas Tsetseris leads the Computational Condensed Matter Physics and Materials Science Group at the National Technical University of Athens (NTUA) in Greece. He and his team lead on the computational modelling for the RADICAL project.